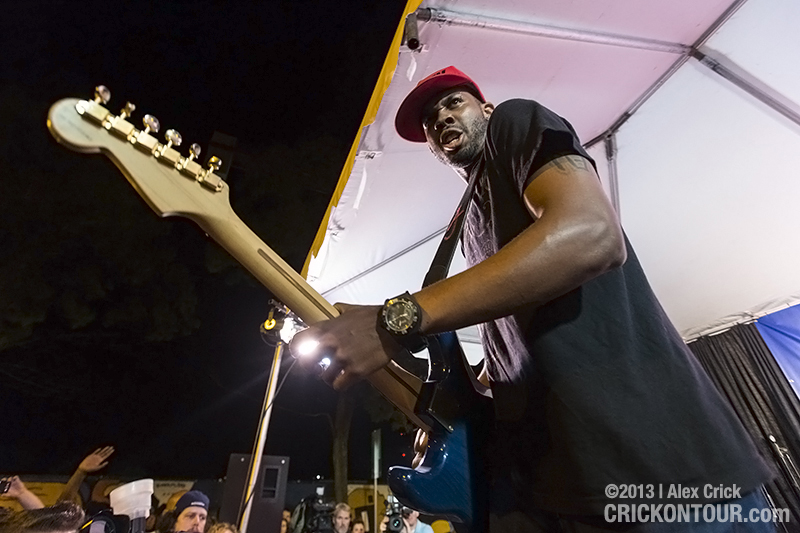 Ayron  Jones (pronounced A-Ron) found his current stage the old-fashioned way. Playing shows, playing more shows, and then playing still more shows.  It didn’t matter where it was or whether there were 5 people or 500.  People would see him at these shows, and then once all the hairs on the backs of their necks returned to normal, they told their friends, who told their friends and, you know the rest.  Very few YouTube videos are out (and only one official) and their full length studio album has yet to be released. It’s one of those, let the music speak for itself kind of situations (that is actually working), and on behalf of no one in particular except myself, I’d like to say THANK GOD!! I find this kind of organic buzz refreshing and exciting and hopeful for someone who does not identify as a music media tech savvy or insider-y person.

I just like music. I grew up in a Seattle garage band house on rock, blues, reggae, hip hop and funk.  I listened to The End, watched MTV, wore Doc Martens and plaid shirts. The first time I heard Ayron Jones & the Way (with DeAndre Enrico on bass & Kai Van DePitte on drums) my inner 12 year old self started to jump around and look for the Manic Panic. But enough about me.

About a year and a half ago another Seattle native who needs no introduction, Sir Mix Alot heard about Ayron from a friend too and though he probably didn’t think about reaching for semi-permanent hair dye, he did see enough to sign on as producer of his first full-length studio album.

“What I see with Ayron Jones & The Way,  I see the resurgence of Seattle and I mean from an artistic perspective. I think 20 years from now I’ll be proud  to say I worked with them. You know when these guys are old and grey, they’ll still be crankin’ out hits. I never produce stuff just for money, I produce because I love it so I had to be a fan of the band first and that took about 15 minutes. Seriously.” – Sir Mix Alot

The first thing that struck me when I spoke with Ayron last Friday was how he first appeared a bit quiet or shy until the moment he spoke.   I saw it in the video too.  It opens and you can barely see his face and at the close again he’s soft spoken with his head down, but the song is anything but soft.

In conversation, he enunciates with the speedy enthusiastic articulation of someone enjoying the flavor of legitimate traction on their dreams without wanting to lose any of it. He’s confident but humble, calling himself “accidentally artistic.”  A natural leader and businessman as well as artist, which let’s face it is critical to professional success.  A career can not be sustained on talent alone anymore than a relationship can be sustained on love alone.  Ayron gets it.  He gets it, and he wants you to get it and his music too. He’s taken a lot of time to craft his upcoming release deliberately and masterfully.

“I see myself as the leader of a ship, the captain, and I’m going to continue to lead my group to greatness.  We’re going as far as we can go.”

Tomorrow Ayron will play a solo unplugged set of original material and covers at LUCID at 9pm with no cover.  I can’t predict the future, but I really believe the opportunity to see him in venues like LUCID for free, a few feet away, where the gravelly conviction of his voice and the exhilaration of his guitar doesn’t use or need a bunch of amps to thump the insides of your chest and give you chills are going to be a hell of a lot harder to find after this album comes out November 2nd.

But hey, you don’t have to take my word for it.  The way Ayron works, one of your friends is bound to let you know soon anyway.